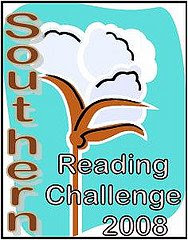 My goal today (if you haven't noticed) is to update my blog with all of the new challenges that I have joined. Then I plan on standing back and going "Aaaaaaack" because I am most assuredly over-extending myself. But it is all in fun so who really cares? For this challenge I had to pick only 3 books written and placed in the South. I added a few extra for just in case measures :)