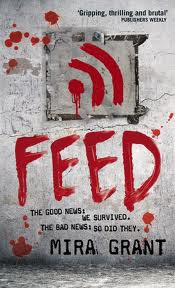 From Goodreads:
"In 2014, two experimental viruses -a genetically engineered flu strain designed by Dr. Alexander Kellis, intended to act a cure for the common cold, and a cancer-killing strain of Marburg, known as "Marburg-Amberlee"-escaped the lab and and combined to form a single airborne pathogen that swept around the world in a matter of days. It cured cancer. It stopped a thousand cold and flu viruses in their tracks.
It raised the dead.
Set twenty years after the Rising, the Newsflesh trilogy follows a team of bloggers, led by Georgia and Shaun Mason, as they search for the brutal truths behind the infection. Danger, deceit, and betrayal lurk around every corner, as does the hardest question of them all:
When will you rise?"
Sorry but I had to cheat and use Goodreads summary as I was struggling for the words on my own. So let's start off with the fact that I loved this book. Loved it! I'm seriously thinking that this book has blown every book that I've read so far this year (and a good majority of last year's reads) out of the water. I enjoyed it that much! Feed is one of those books that sucks you in and doesn't let go. I didn't want to set it down....in fact all I really wanted to do was sit and read which made getting anything else done a bit difficult. And I loved the fact that I was so caught up within the story that I would find myself reading nonstop for long periods of time or staying up late to keep reading. That almost never happens anymore.
One of the things that made this book so great in my opinion was the world building that the author creates. Feed was so incredibly detailed that I found myself feeling like I was living in Shaun and Georgia's world. A world of fear and change, with the knowledge that eventually no matter what everyone becomes the undead. It was a bit eerie, I have to admit. But the details and descriptions pulled me deep down into their story and the world that the characters lived in. I really liked the characters and the connection that Georgia and Shaun had with each other. I loved that they were bloggers and the important role that the author gave blogging within the story. And the storyline itself was great for so many different reasons. I found it refreshing to see that the author was able to keep the storyline almost realistic considering that zombies were involved. The way that it was written made it seem like it could almost really happen, that this was all really possible, and the results were pretty bleak. The story was fast paced throughout and there were a couple of twists that really surprised me. And the end. I don't even know what to say other than it was heartbreaking.
This book will hands-down be going on my top ten reads this year. I can just about guarantee it. I loved everything about this novel and don't have a single negative thing to say. So I'll leave you with a very high recommendation(READ IT!!), and I'll be waiting most impatiently for the 2nd book in this trilogy to come out.
P.S.- Did you know that this is pseudonym for Seanan McGuire?? I have the first book from her other series checked out from the library and I can't wait to read it now!!
Disclosure- I checked this book out from the library so my gushing review was all my own and not because I received it from anyone :) Just saying...
Posted by samantha.1020 at 5:09 PM