Look For Her by Emily Winslow (thoughts) 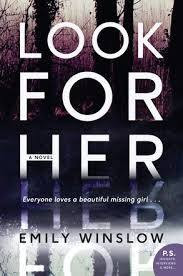 "Just outside of Cambridge, Lilling seems like an unassuming idyllic English village, but it’s home to a dark history. In 1976, a teenage girl named Annalise Wood disappeared while riding her bike home from school. Though her body was later discovered in a shallow grave, the culprit was never found. Decades later, Annalise maintains a perverse kind of celebrity in the small town, and is still the focus of grief, speculation, and for one young woman, a disturbing, escalating jealousy.When DNA linked to the Annalise murder unexpectedly surfaces, cold case investigator Morris Keene realizes he may now have the chance of his career. Morris and his former partner, Chloe Frohmann, hope to finally solve this perplexing mystery, and bring closure to a traumatized community. But the new evidence that should be the simple solution instead undoes the case's only certainty: the buried body that had long ago been confidently identified as Annalise may be someone else entirely, and instead of answers, the investigators face only new puzzles.Whose body was unearthed all those years ago, and what happened to the real Annalise? Could she have had a secret child? Is someone interfering with the investigation? And is there a link to a present-day drowning with eerie connections? With piercing insight and fascinating twists, Emily Winslow explores the dark side of sensationalized crime in this haunting psychological thriller."

I read the above summary and just knew that I wanted to read this book as soon as possible so I jumped at the chance when I received an email about a blog tour for it.  I didn't realize that it was part of a series though and honestly it didn't effect my enjoyment in the slightest.  I found myself just so intrigued by this cold case that was being worked again thanks to new evidence.  I did find that that I was slightly thrown off at the beginning of this book because each chapter was told by a certain character.  It took me a little bit to catch on to the rhythm (and also get to know each character) but by the halfway point I was hooked.  I then really appreciated the different viewpoints as I felt that it added to the overall story line.  I also felt like the way that this book was set up added to the suspense.  The author pulled me in and I didn't want to stop reading after that.  I would think that I had an idea of what was going on only to find that I was completely wrong not long after.  There were some particularly tense moments featuring the story line told by the psychologist that had me unable to set this book down.  I just had to see what was going to happen next!  There were all of these threads in this book and I loved that the author was able to tie them together in a way at the end that felt like a satisfying but unexpected conclusion.  I am now really excited to go back to the beginning of this series and see how it all started!

Overall I am very excited about this series and really enjoyed my time with this book.  The way that this book is set up and the fact that it was based around a cold case made it really stand out to me.  It's different from what is out there and I really appreciated that fact.  I also really enjoyed the main characters and am excited that I have more books with them to look forward to.  I wanted to say that this was a quieter mystery but there were just enough of those fast paced moments where that wouldn't be a valid statement.  It was a great mystery though and I'm eager to read more by this author.  I would recommend this book to fans of both suspense and mysteries alike.  It's definitely a four star read for me!

Bottom Line:  A really great mystery that kept me engrossed throughout!

Disclosure:  I received a copy of this book thanks to the publisher as part of a PICT Book Tour.

Emily Winslow is an American living in Cambridge, England. She trained as an actor at Carnegie Mellon University’s prestigious drama conservatory and earned a master’s degree in museum studies from Seton Hall University. For six years she wrote for Games magazine, creating increasingly elaborate and lavishly illustrated logic puzzles. She lives with her husband and two sons. She is the author of four novels and a memoir.